[This is an extended version of the press release sent during the week of Monday September 12, 2016 - View the release here]

Today, both are also fathers with children developing their own affinity for cycling. The first official practice of the SoMont Cycling Youth MTB Team convened in July of 2016.  Since that time, Raisch and Nguyen have planned and conducted learning experiences, training, and practices for the youth in Lorimer Park, Baederwood Park, Tookany Creek Parkway, Pennypack Park & Rail Trail, Valley Green, and at the Philly Pumptrack.  Along the way, they picked up new team recruits and supporters. Today, the SoMont Cycling Youth MTB Team is comprised of 9 student-athletes, spanning grades 6 through 10, and drawing athletes from public and private schools throughout southern Montgomery County.  The team is also enthusiastically and financially supported by 8 community businesses.

After nine months of planning, and six months of general practice and race training, coaches Nguyen and Raisch, along with their corporate sponsors, and student-athletes’ proud families are ready to present their race-ready SoMont Cycling Youth MTB Team at the season kick-off PICL 2016 Inaugural Race which will be held just west of Harrisburg at the Oesterling Farm in Marysville, Perry County, PA.

“Our athletes impress me every time we’re out on the bikes,” said Nguyen. He further added, ”Their confidence is growing off the charts, but, more importantly, they are developing meaningful friendships. They’re just a great bunch of kids.”

“We have a fantastic group of dedicated community based sponsors, coaches, student-athletes and families. I am so proud of what we’ve collectively accomplished and I look forward to seeing our team race and represent Southern Montgomery County,” remarked Raisch. However, Raisch is boldly looking beyond this season further adding, “We are actively recruiting more student-athletes, preparing for a time when Abington, Cheltenham, Lower Moreland and other school districts adopt mountain biking as an interscholastic sport. This wonderful sport promotes physical and mental fitness, equality, inclusivity, and an appreciation of the great outdoors. We don’t think it gets much better than that.” 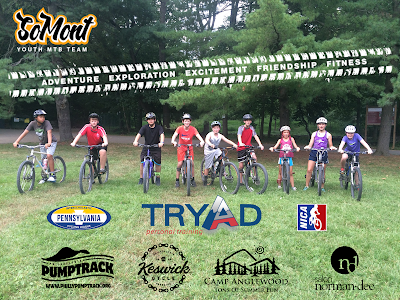 The Pennsylvania Interscholastic Cycling League (PICL) is a non-profit 501(c)3 NICA Project League. The league was organized in 2014 with the goal to provide fun, safe, and competitive mountain biking opportunities for middle (grades 7-8) & high school students in the Commonwealth.

SoMont Cycling Youth MTB Team is a PICL sanctioned composite team, organized in 2016.  It is an independent youth mountain bike team in the Cheltenham, Abington, Rockledge, Lower Moreland and Springfield areas of southern Montgomery County. The goal of SoMont Youth MTB is to introduce boys and girls (6th to 12th grade) to the sport of mountain biking and to help them use the sport as a way of developing a new life-long athletic interest.  The team and coaching philosophy is to use cycling, and the mountain bike itself, as a way-of-thinking to transport our riders to a sense of adventure, exploration, excitement, friendship and good health.

Beyond the Marysville Epic, the 2016 season race series will continue as PICL will host 4 more races.  The next scheduled event Race #2: The Flow at Jordan Creek is scheduled for Sunday, October 2nd at Jordan Creek Park in Allentown, Pennsylvania. The season will conclude with Race #5: Finals at Fair Hill, November 6th in Elkton, Maryland, only a 20–minute drive from the most Southeast corner of Pennsylvania.


[This is an extended version of the press release sent during the week of Monday September 12, 2016 - View the release here]